Fabián Ruiz, better known as Chama Ride, was possessed by the gods of Rock “N” Roll from an early age along with his first love, skateboarding. So much so that he figured out how to put them together and created “The Skate Guitar Slide” where he now performs on the street “Street Performances” and has even come to Los Angeles, California to play at Venice Beach and parties in Hollywood.

Fabián used the power of the Black Revolver decks to create one and the response was an explosion of epic musical clips and covers. Push play, watch the videos, get the music and style and burst the way it should. 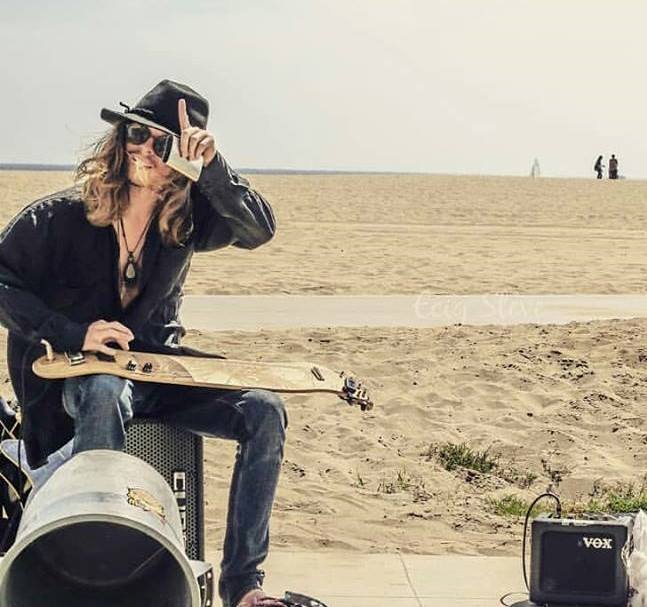 1) When we saw online one of our Black Revolver decks turned into a skate guitar slide, with that video clip and that song really moved us not only for the skateboarding but for the power that you put, tell us Where is Skateadelics born?
Skateadelics was born because my first passions in my life, first skateboarding and then music, so, to give it a twist and not be the typical guitarist, I merged the skate with the guitar and that’s where Skateadelics was born.
My father is an excellent guitarist so as a child there were always guitars at home and I liked it but I never took it seriously until my adolescence, the first thing was skateboarding, I started to skate like I was 12 years old, but in my sessions I met friends that played and reminded me of the magic of music.

2) How did you start in music? Any anecdote that you can tell us?

As a child one day I asked my dad to teach me to play and in just one day I learned the basic chords but then I did not advance for long. Years later I got together with friends who played rock covers and that motivated me to continue learning and I liked it more and more.

3) Tell us about your particular music style and how you came to it.

My style is rock with influences in the blues and also with a bit of psychedelia but I do not lock myself in any genre. I play from classical music to hits from the nineties. The music in the videos of Skate like for example the videos Zero-Dying to Live, Baker 3, PIG-slaughterhouse, etc … that has great songs, they injected me to skate and in the same way their soundtracks.

4) How did you come up with a skate guitar slide? What accessories do you use to play?

First I did it as a personal project since i like to create, i wanted a Slide Guitar or also known as Lapsteel but that besides being a difficult instrument to get in Costa Rica is expensive so it occurred to me to see if I could mount one on my old skateboard. The accessories included in the skate guitar slide are the components of an electric guitar, pegs, pickup, bridge, strings, etc.

5) We know that you make performances in the street, tell us What is being a street performer?

It’s playing on the street in exchange for tips. It’s like street skateboarding but imagine you get tips if the public likes your tricks.

6) We have seen that you have play in Venice Beach in Los Angeles, where the music has taken you?

I have always wanted to travel the world and music allows you to do so and with that finance your trips, sometimes it is not easy but it is very enjoyable. Venice is the cradle of skateboarding and a totally different and crazy place so my proposal was very accepted and I had a great time, although some nights I had to sleep on the beach using my pillow amplifier and hugging my guitar, others I ended up playing in parties in Hollywood.

7) What do people tell you when they see you play live with a skate guitar slide?

Many say that they had never seen that before, they ask me if I did it and those who know a bit of music ask me about the tuning that I use. 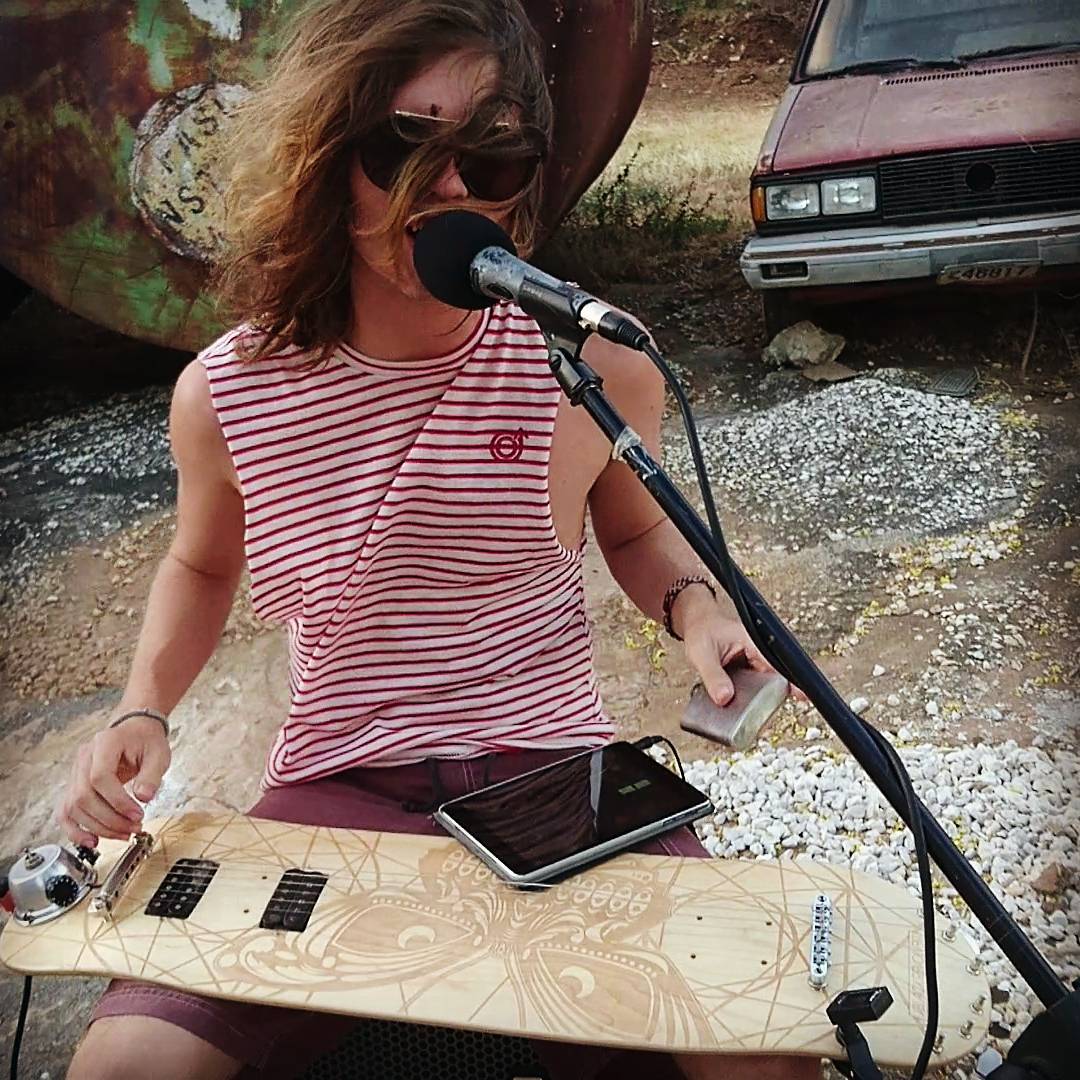 8) Finally, how do you make your music known? and something you want to add.

For the moment most of all social networks, in my personal facebook profile I accept everyone is Fabian Chama Rz and my two pages “Skateadelics” and “Chama Ride” I will soon have my music on Spotify and Bandcamp so add me, keep skating and Rocking. Pura vida brothers. 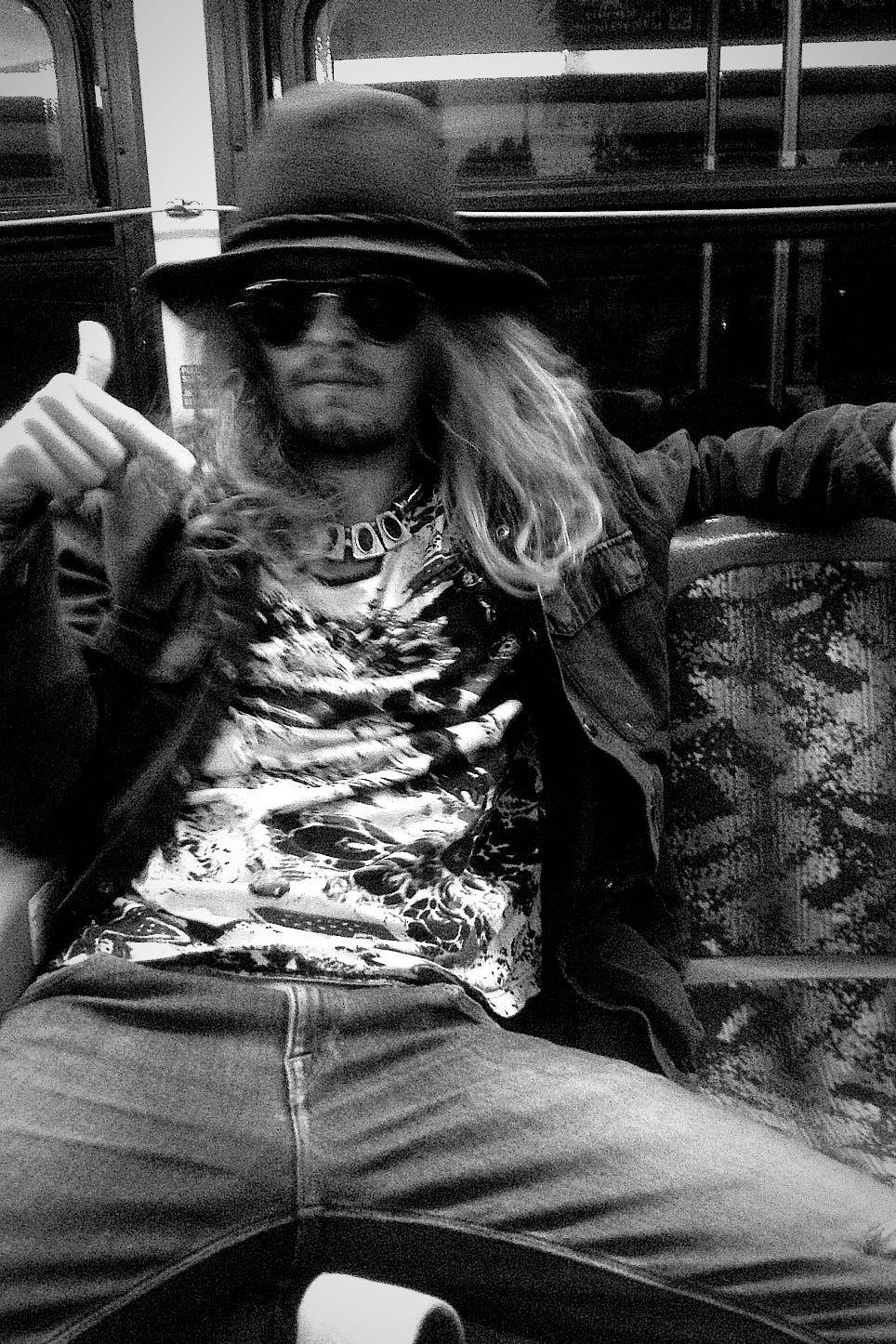